[Hello to anyone out there!

Project: exposure therapy for my fear of posting sloppy/confusing stuff to this blog continues. So uh... sorry. I hope to return to regularly posting polished content soon.]

Consider our knowledge of holes. As discussed in D and S Lewis' On Holes, it's appealing take holes to be distinct from things like the air inside them, portions of the matter that `hosts' (e.g. portions of cheese with some diameter aronud a hole in Swiss cheese). 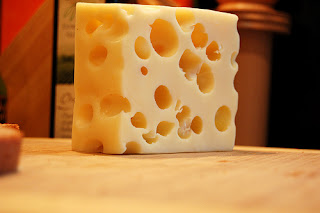 We seem to know how deeply a piece of cheese must be indented in order for there to count as being a hole in that piece of cheese. But (to a crazy philosopher, for a second) this knowledge can seem rather mysterious. For our senses tell us how the cheese is distributed through space. But how do we know where to draw the line: re how shallow a hole can be? No sensory experience seems to point out a single metaphysically special place to draw the line. So how can one explain the match between human beliefs about how shallow a hole can be and objective matters of facts?

It's appealing to say: there's no mystery about human accuracy here because if we had used `hole' differently (by taking the minimum hole angle to be larger or smaller) then the meanings of our words would have been different so these alternative hole-identifying practices would have yeilded true utterances. But since variant practices of "hole" individuation can require change in sentences whcih don't even use the word hole  (e.g. a purely logical sentence like the Fregean paraphrase for `there are >3000 things' can go from true to false). So it seems plausible that allowing such changes in meaning requires allowing variant meanings for logical vocabulary like ``there is'' as well as in the meaning of  ``hole''.

Moderate Quantifier Variance: there are multiple existential quantifier like meanings which the words `there is' can take on in different ideolects, (say English_1910, English_2010 etc.), though within any particular ideolect `there is' is univocal.

I like to use Moderate Quantifier Variance to explain/vindicate the freedom mathematicians take themselves to have to introduce new logically coherent structures for study, by saying that when mathematicians consistently extend the axioms of pure mathematics by adding axioms describing some new mathematical structures like the complex numbers, their words can both give meaning to expressions like `complex number' and also change the meaning of `there is', so that these axioms express truths.

But whatever you say about math, I think moderate quantifier variance is already useful for understanding our knowledge of swiss cheese!

Sometimes the fastest route to getting the right answer is to say something wrong clearly enough.
Why not come join in the debugging?
[Note: I wrote much of this blog mid-grad school, so earlier posts don't represent my current views.
See www.seberry.org for publications, draft papers and my current settled opinions. ]